Og her finner du nettstedet til Norsk Luftfartsmuseum i Bodø.

On a formation training flight with Vampire from Vaernes AFB we experienced the for pilots well known problem vertigo.

Vertigo has caused many aviation incidents and accidents. To understand the effect better, imagine being blindfolded and swirled around. As your eyes are unable to correct the signals being transmitted to the brain, the brain is confused, and dizziness occurs.

The balance organ in the ears consists of three curved canals (the utricle) in the inner ear. The utricle contains receptors called hair cells, they distinguish between degrees of tilting the head because of the apical cilia set-up. These are covered by otholit, and once you tilt your head the otholic viscosity makes the cilia tilt as well. Nerve impulses are sent to the brain stem containing information on direction and speed of the movement. The motion registered by the balance/sensory organs will be felt as continuing even if it had stopped, due to the viscosity of the fluid.

Our eyes transmits the most important correction signals to the brain, and without the visual signals the balance organs of the inner ears have absolute control of interpreting the impulses, false or not.

Even though a pilot has a virtual horizon instrument in the control panel, the false sensations can be so forceful that an inexperienced pilot may be overtaken. This has happened numerous times, and may very well be the explanation of otherwise unexplainable accidents. These days most small aircraft are well equipped with instruments. However, a hobby pilot lacking instrument experience should bear in mind that relying on instruments alone may not be sufficient when flying in bad weather.

As an example of false sensations Ill first mention a demo-flight with new doctors who were about to start their internships in the Air Force. We used a two-seater Harvard training aircraft, and it was a nice, sunny day with white cumulus clouds. Directing the plane towards one of the clouds, I turned into a sharp left turn just before we entered into it. With the help of the virtual horizon, I turned into a sharp right turn inside the cloud and exited with the other wing pointing down. The passenger had not noticed, he looked out at what he still thought was down  and was surprised by looking up at the blue sky. The passengers got a good demonstration of that the sensation of up or down, without visual correction, couldnt be trusted.

This is all the background for the story I am about to tell:

Two training flights were scheduled with Vampire MK52 in formation. The Vampire was the Air Forces first jet fighters; we got the first ones, MKIII, in 1948. 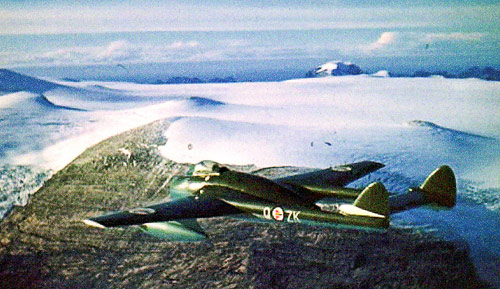 I was flying with a fairly new pilot who had graduated from flight school earlier that summer. He was a very good pilot considering his relatively short experience. Fridtjof and another young pilot were on the other flight. The weather was overcast, but with cloud cover at 2000 feet and good visibility below no problems was anticipated.

Fridtjof and I, with our wingmen, took off in succession, and climbed quickly through the cloud cover. We were at the top already at 4000 ft and flew into the sunshine. We did the formation training separately in about fifty minutes, when we had to abort to retain enough fuel for the landing approach procedure. We didnt have more than 1:10 in secure fly time without drop tanks and at low altitude.

There was no radar at Vaernes, and Vampire didnt have as much as a radio compass onboard so we had to make do with a radio bearing from the tower. When we sent out a bearing signal the tower was able to see the direction for us. We were given directions that brought us in over the tower and thereafter sent out on a course S/E for a certain number of minutes and then turning left until we had a west bearing on the airbase. If we, after all of this, were correctly placed according to the tower bearings we could start the descent, controlled by continuous bearings.

Fridtjof called me up on the radio and suggested we do a four-plane formation and do the descent together to save time. I agreed, and we met over the cloud-cover above Trondheim. Fridtjof was the leader of a finger four formation. If you put your right hand on the table youll get the impression of how it worked  Joffen as the middle finger, his wingman as the forefinger, the two fingers to the right as myself and my wingman Odd.

We received our bearings, QDMs, which brought us in above the tower. We were then directed onto a S/E course and cleared to descend to 4000 ft. After three minutes we were asked to start a turn to the left and at the same time descend to 3000 ft. This brought us into the cloud-cover and we closed the formation so that we were flying wing-tip to wing-tip, which are necessary due to the low visibility inside the clouds. Flying this close means that only the leader can fly on the instruments, the rest of us had to keep our eyes glued on the wing-tip of the next aircraft, not letting go for a second as there were only a couple of meters between the wings.

It is problematic, until one gets used to it, not watching your own instruments. It dramatically increases the risk for vertigo.

When doing such a sharp bank my wingman, who was at the outside of the formation, will be further up than the rest of us and as he was doing an outer turn will have to increase his speed to keep his position. (Again, this can be illustrated by banking your right hand to the left  seeing that Odd, as the little finger, is far above the index finger.)

As we were half way into the left turn I notice in the corner of my eye that Odd turns out of the formation. I have my eyes glued on the wing of the leader, but I noticed the light blue belly of my wingman the moment he brakes out. I immediately knew what had happened: vertigo! I was affected myself, and had a strong sensation of flying upside down!

As we started banking left our balance organs registered this, but not that the movement ceased. As we did not have a visual correction, our brains were convinced that we were upside down. Experience helps fighting this sensation, which can be very powerful, however, it does happen that it takes over. I shouted on the radio Odd, Odd, pull out, pull out! There was no reply.

The three of us had to continue descent through the cloud-cover, and we landed safely a few minutes later.

We jumped out of the cockpits and stared towards the east, listening for the characteristic sound of the Vampire, but all was quiet. A quarter of an hour later we realized that the worst had happened. He didnt have more fuel left than for the time that had passed. We reported to the squadron leader, who was already informed by the tower of a possible emergency. We were all called to the briefing room and explained what had happened.

We hoped that he had bailed out, however, the possibility seemed slim. There were no ejection seats in the Vampire, and it would have been difficult to bail in such a situation.

A large search and rescue operation was started in the area, including planes from the flight academy. After some time the wreck was spotted in the mountains south of Hegra by the small Gravann Lake. He had almost succeeded in pulling out, but had touched the ground close to the waters edge. The plane hade skidded across the lake, and the parts were strewn up along the hill on the other side. If hed been just a bit higher up he would have made the pull-up.

It was very sad to lose a friend and colleague who was just starting out as a pilot.

Crisis psychiatry and counseling had not been invented yet, this we had to deal with on our own. Many of us had already lost several friends, and we were not 25 years old yet. That evening both pilots and technicians gathered in the mess-hall and discussed the tragedy. The squadron was like a large family at that time, and most of us were boarding at the air base. It was important for all of us not to be left alone, and to have someone to talk to.

The next day was business as usual, except for the Investigation Commission taking statements and starting the proper investigation procedures.

One more incident happened the same summer  the pilot experienced vertigo and lost control inside the clouds. He went into a spin but managed to gain control of the plane as he exited the clouds. His altitude was so low that had he not exited over a narrow valley he would have been too low. He pulled so many Gs that the airplane was structurally damaged and had to be scrapped. Some times the margins are on the best side!!