Og her finner du nettstedet til Norsk Luftfartsmuseum i Bodø.

On a flight from Gardermoen, Norway to Burtonwood close to Manchester, we lost both engines on top of clouds.

The 335th Squadron received 6 ea Fairchild C-119 Flying Boxcars in August of 1956. The same month the squadron delivered 6 ea Douglas C-47 Dakotas to Denmark. I had been with the 335th for one year at the time.

Five pilots had been attached to an American Squadron in France on a USAF Airbase, Evreux, for four weeks in July to become acquainted with the C-119. It was an interesting time, and among our experiences was flying the Route 111 to Madrid, Casablanca, Algerie, Tripoli, Athens, and the same route back. The aircraft was steady and well behaved. The problem was the sensitive Curtiss Wright engines, the same engines used in DC-7C. 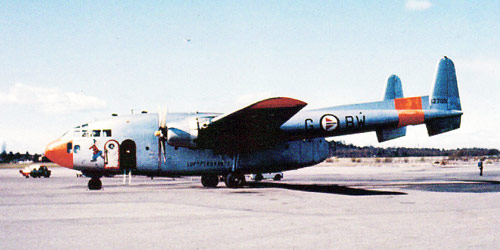 On October 24 we were to fly to Burtonwood, a base between Liverpool and Warrington. This base was at the time a technical storage facility for NATO. We were delivering two jet engines in steel containers, and were to pick up two others, which had been overhauled.

We planned to follow the coastline to Kristiansand at the southern coast of Norway, and continue straight across the North Sea to Spurn Head on the English east coast. There was a strong low pressure with a front over the North Sea, with a warning of possible icing.

The C-119 had eight petrol driven heaters in the attic, providing warm air to the de-icing system within the wings and tail. Seven of them started, but the eight didnt. The carburetor heat was a standard of 20 degrees C, which we adjusted manually. We picked up large amounts of ice flying through the front, but we did not experience any problems as the de-icing worked fine.

We had passed a weather front zone close to the English coastline, and entered clear and warmer air on top of the cloud-cover. The arrow of the radio compass swirled around, indicating that we were passing above the radio beacon.

I was about to report the passing to ground control over the microphone, when I noticed the torque-instrument indicating that the left engine was not giving any effect. No warning lights or other signs gave us any indications of what could be wrong; there was just no effect. As we were discussing what could have happened, the other engine stops as well.

It became very quiet onboard, the only sound being the wind outside. We looked at each other, not quite grasping what had happened. I pushed the radio transmitter button and gave our position, informing ground control of our situation. A few seconds later we were told to take a left turn to a heading more towards southwest. We entered the given heading and reported on the radio, but were unable to get any more radio contact. We may have gotten in too low already, as we were rapidly, very rapidly, losing altitude.

We did have parachutes, but the westerly wind was very strong, and if we had jumped we would have drifted out towards the North Sea. The prospect was not too tempting! The plane continued gliding through the cloud-cover, downwards on the course we had been given. We were all wondering what we would see as we came out of the clouds  that is, IF we got out of the clouds before we crashed! Would it be forest, farmland, a town, or hills? There was no time to locate a map of the area. As we passed 2000 ft we could see land underneath, but the horizontal view was not clear.

After just a few seconds I glimpsed something long and dark through the mist, 45 degrees close to our right. As we were just seconds from a major crash-landing, an airstrip appears through the fog - it felt like no less than a miracle!

Got it! I said to the Squadron Leader, who was captain. He was in the left seat and could not see what I saw. I turned the aircraft 45 degrees towards the right, and the end of the runway was straight ahead of us. The captain took over again, and I held on to the handle for the landing gear.

As we passed 500ft we were confident wed be able to reach the start of the runway, and I pushed the landing gear down. Seconds later we reached the runway, and rolled safely on the ground. As we turned at the other end of the strip one of the engines started again, and we were able to taxi in and park.

We had landed unannounced, and opposite the direction of runway in use, so we expected a certain reaction. As we disembarked, a redhead wing commander greeted us, sporting a stiff RAF-moustache, whip and full gear. His only comment was: Just in time for lunch, gentlemen!

Following a hearty lunch we went back to the plane, started up again, and both of the engines ran as normal. After a test we took off and continued to Burtonwood.

While we were in England the Embassy arranged for a meeting with an engineering group from Curtiss-Wright, who were visiting BOAC at the time. They told us the same thing had happened with a Constellation. The reason was assumed to be that ice had formed at the edge of the air intake in the wing during severe icing conditions. As the air temperature rose, the ice had come loose, being sucked into the engine as slush and blocked the air filters. Having studied the weather reports for that day, and noted the circumstances and chain of events, they were convinced that the same had happened to us. The engines had stopped abruptly, as they would have done during severe carburetor icing.

The C-119 was pretty good as a glider anyway  even though the gliding performance was somewhat less than what would have been preferred!